The desert was, not at all as I expected it.

Films like 'Ice Cold in Alex' and 'The Last Flight of the Pheonix' had set the scene for rolling dunes and an absence of life.  In reality it was not like this at all...

I left Curtin Springs with my pack fully loaded and a new very knobbly sand tyre on the bike.  I had enough tuna, baked beans and water to last me about three days.  I took 2 liters of engine oil for the leaking bike and filled my jerry can until it spilt over on to the sand.  I was going to 'Finke' which would lead me to the 'Oodnaadatta Trail' and the wilderness. 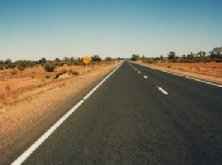 I headed down a section of concrete road which bordered the edge of the Great Artesian Basin.  I was, once again, struck  by the sheer scale of the view before me.

The Great Artesian Basin was sea bed ina previous age.  Now water from the Eastern Highlands is forced hundreds of kilometers west, underneath the ancient plain finally to rise again, in the middle of an arid salt lake in the desert.   The water drives back the salt and creates life, some of which is found no other place on the planet, but I get ahead of myself.

An easy days ride down 350 kilometers of straight road and I was at my gateway to the back of beyond.  I spent a pleasant evening reading "Green Mars" by Kim Stanley Robinson and went to sleep early to rest. 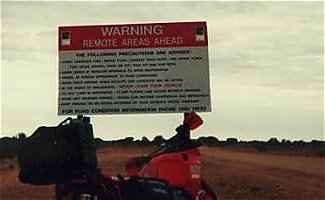 The next morning the sun forgot to come out.

It was going to be a cooler ride, but I was looking forward to leaving my spare oil in the pack.  I ate well and after some coffee I set out in search of my trail.  I found it surprisingly close to where I had slept.

The trail looked much like the rest of the desert.  There was, however, a strip guarded by a sign which read "WARNING Remote Areas Ahead".  I read the sign, and thought about whether or not I was well enough prepared to go for it.  I checked the pack, tyres and oil and then I was off.

The terrain was a little slippery but the knobbly tyre and the practice I had had in the Kimberly region made for lots of grip.  It did not take long before the Desert started to work its magic. 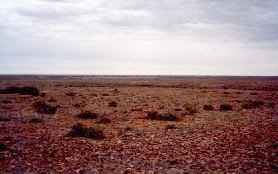 I was travelling at about 100 Kph over mixed terrain, and all the time I was headed away from the reassurance of a maintained road.

I started to feel dwarfed by size of the place, but I was a part of it...   It was around me...  The scrub, the flowers the occasional camel... born here or brought here we were all here, and it started to feel like "here" could be anywhere!

The next day I came across the "Old Ghan Railway".  This was abandoned in 1980 when the "New Ghan Railway" was built.  I had enough fuel for a detour or two so periodically left the trail to follow the old railway track. 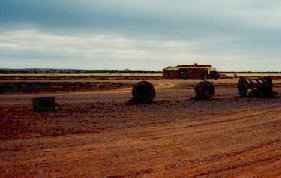 I found two stations about 60 kilometers apart which had been used to refuel the old steam trains.

It was a strange feeling.  Here was evidence of technology, on what looked like the surface of Mars.

I stopped to take a picture, and worked on getting some feeling back into my rump.  After soaking in the environment for half an hour I returned to my bike.  While checking the bike over, I noticed a stronger than usual smell of petrol.  I looking down at the sand, sure enough there was a dark patch... I was loosing fuel!

I turned off the petrol feed immediately and happily the slow drip stopped.  I was thankful.  This meant the tank had not been pierced by any of the stones the bike had been throwing up.  I checked from the tank to the carburetor and found that the fuel feed pipe was vulcanized and cracked.  I kicked myself for not having had the discipline to turn off the fuel whenever I stopped the bike.  That was not going to help me now though.

I feared for how much petrol I had already lost and it was almost impossible to tell from looking.

Gingerly tapping the tank I had to accept the drip most have started some time ago.   I seemed to be some litres short, I needed to fix the problem and go straight to fuel.

With no spare pipe I had to improvise.  I searched around and after a few minutes I found a fence post half buried in the sand.

Most of the wire attached to the post had rusted long ago, but I found a small amount that was still silver.  From my pack I got my pliers and unraveled the wire into smaller strands.   I then cut the rubber pipe back as close to the crack as I could.  There was just enough elasticity in the rubber to pull the remaining pipe onto the carb feed and twist my thin fence wire around the pipe, although three hands would have made this a lot easier.  I turned the fuel tap on not daring to hope that the problem was fixed.   After watching the pipe for about 2 minutes, I started the engine.

I pulled into the William Creek Homestead with no fuel in the jerry can and on my reserve tank.  That would have given me at best 60 kilometers if the revs were kept down.

I ate a wonderful steak and talked to the owners over a few beers.  Later that night, while I lay in a bed at the back of the farm buildings, I started to think what might have happened if the leak had gone unnoticed.

Next day after filling up with petrol I was back on the road.  The ride started alright, that didn't last long.

About 10 kilometers past William Creek, the trail turned from sand to pebbles and the bike started to slide a little.  Within 20 minutes the pebbles had become stones and each one was at least as big as a human head.  At 60 Kph the bike felt like it was going to shake itself to bits, the front wheel was bouncing left and right and it was all I could do to keep hold of the handle bars and keep the bike upright.

I could not go back now and according to my map reading if I kept going I would be at a 'real' road by the end of the afternoon.

I pulled over.  I checked the stones had damaged nothing, secured the packs and then started off again.  This time I used the same tactic I had used on the sandy ridge road of the Kimberly region, I opened up the throttle!

At 120 Kph the bike flew over most of the stones and the steering became much lighter again.  Round and round in my head I just kept thinking "concentrate".

It was worth it.  If  that treacherous road had been Yang, two hours later I found Ying. 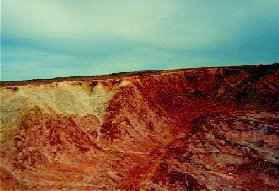 Horizon after horizon had come from in front of me and disappeared behind me.  The journey had been flat, the only significant differences had been the type of stone I was riding on.  Then at the exit shore of the prehistoric sea bed I found these cliffs.

The sand in the central desert is red, but these cliffs were red in comparison to that!  This is Ochre, it is thought to have been used by the local Aboriginals as a form of currency for thousands of years.  It is a chalk-like substance which they use as make up and for cave paintings.  Traces of Ochre from this cliff have been found in paintings hundreds of kilometers away in Alice Spring. 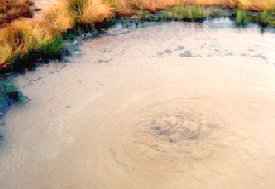 Here, after a journey of hundreds of kilometers, water powered by the heat of the earth and the weight of the rocks above, is pushed back into the daylight after its nocturnal journey from the eastern Highlands.

The warm water, rises in bubbles through salt from the old sea which it pushes aside.   As it does so it creates fertile pockets.  There is life in and around this water.  For as far as the eye can see, a stream trickles away through a white salt scape.  The source and its descendant are escorted by trees, brush and small alien flowers.  Some of the life is unique to this place and so fragile that any contamination of  the water could eliminate the eco-system.

Sadly, this is probably how Australia lost 80% of all is fauna when the Europeans arrived. 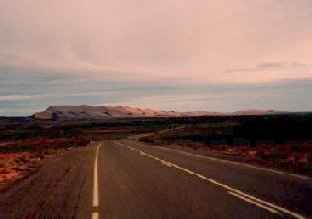 That was the last stop in the Desert.  Later that day as the sun was setting I headed back on to a solid road with a view of the Flinders range streching out ahead of me.

With a feeling of acomplishment, I set off to find a place to camp.